My name is Emily Maguire and I’m a singer-songwriter originally from London. I’ve released five albums on Shaktu Records, the independent record label I set up in 2003 with my Australian partner Christian Dunham. We were living in a shack on a goat farm in the Australian bush at the time and so we financed my first two albums by making and selling goats cheese. Since coming back to the UK in 2007, my songs have had a lot of airplay on UK radio and I’ve toured with major acts including American legend Don McLean.

In 2010, I published a book called ‘Start Over Again’, a very personal account of my experiences of dealing with bipolar disorder. I had done a lot of radio and press interviews by then and never mentioned the fact that I had a mental illness so I agonized over whether to publish it. My manager thought it might end my music career. But when the book was launched on the BBC on World Mental Health Day I was inundated with messages of support. Since then I’ve been able to talk openly about my own experiences. I’ve just finished a 3-month tour of psychiatric hospitals, singing my songs in locked wards across the south-west of England. I’ve discovered that being open isn’t about being brave, it’s about being liberated.

Having a bipolar mind defines my life; it’s not something I can just forget about. I’ve experienced the terror of two psychotic episodes in the past and so I watch myself like a hawk. But I’ve got much more confidence now in my ability both to manage the condition and to make the most of the benefits it brings me. As I’ve found creative fulfillment and a sense of purpose in my life, the illness has become in many ways enabling, not disabling. I regard all this energy in my head as something precious because it inspires my songwriting. Creativity for me is the silver lining to the bipolar cloud.

I’ve developed my own coping strategies and I’m very disciplined so it has got easier over time to deal with life on a rollercoaster. I get up early, I go to bed early, I don’t smoke dope anymore, I exercise, I meditate every day, I take my medication, I don’t hang around stressful people, I go for walks, I practice positive thinking, I laugh at myself, I don’t take too many things for granted. I make the most of the times I’m high to write masses of songs or compose instrumental music. When I’m low and have writer’s block, I go to art galleries to look at paintings and read lots of poetry to fill up my creative reservoir again.

“From being something I started doing to pass the time, songwriting has become my vocation.”

I grew up with no TV at home so playing music and reading books was always a huge part of my life. I learnt to play the cello, piano, flute and recorder from a very young age. I only got a guitar for my 21st birthday because I was ill for a long time with fibromyalgia pain syndrome and needed to do something to distract myself while I was stuck at home. When a friend suggested I should try writing a song it was a revelation, perfectly combining my love of poetry and music. Suddenly the illness became a complete blessing in disguise because I had all this time on my hands to write songs.

I’m a great believer in the power of music to make people feel better. The last time I was sectioned I was allowed to keep my guitar on the acute ward where, aside from singing endless Bob Marley songs with the other patients, I wrote a song called ‘Falling On My Feet’. Four years later, I stood on my own on stage at the Royal Albert Hall and sang it to 4,000 people. Recently I was very moved by the response to a music video for ‘Over The Waterfall’, the most direct song I’ve ever written about my experiences of bipolar disorder. One comment on Youtube said: “Listening to the lyrics brought me to tears. Dealing with this disease is such a lonely thing but hearing this makes me realize that I’m not alone.” And that, for me, makes it all worthwhile. 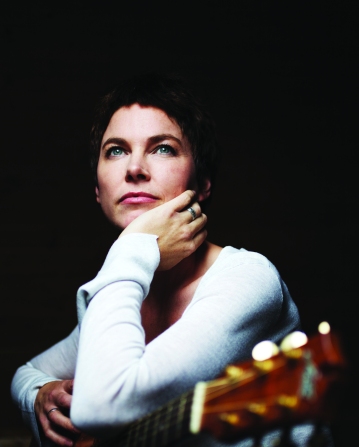 A classically-trained multi-instrumentalist with five albums and two books to her name, Emily Maguire is truly “a talent to be reckoned with” (RnR Magazine), her strong, thought-provoking lyrics, supremely expressive vocals and spellbinding live performances winning her fans across the globe.

Living for four years in a shack on a farm in the Australian bush where she made goats cheese to finance her first two albums, Emily returned to the UK in 2007 and toured extensively with some of the world’s great singer-songwriters, including American legend Don McLean. Her third album Believer, released in 2009, received regular airplay on Radio 2 and was widely acclaimed in the music press, Maverick Magazine hailing it “a masterpiece”.

Emily’s much-anticipated fourth album, Bird Inside A Cage, followed in 2013. With its release funded entirely by her fans, Bird Inside A Cage was a bold departure from her previous recordings, while still retaining all the underlying trademarks of her emotive, lyric-rich songs.

As an advocate for mental health, Emily speaks frequently in the media about combating the stigma of mental illness. She has been featured several times on Radio 4 including Woman’s Hour, Loose Ends and Midweek, where she was interviewed by Libby Purves talking about her book Start Over Again, a deeply personal account of her experiences of living with bipolar disorder.

Following an intensive tour of Germany in 2014, while rehearsing for the recording of her instrumental album, Emily developed chronic tendonitis in both arms, forcing her to cancel all her gigs and leaving her unable to play her instruments for 18 months, which triggered a severe depressive episode.

Once recovered, she released her hauntingly beautiful fifth album A Bit Of Blue in 2017. Financed again by her fans, the album received rave reviews in the music press. Emily also published a new book, Notes From The North Pole, a collection of poetry, prose and lyrics.

Songs from A Bit Of Blue have been played on BBC Radio across the UK with the uplifting single For Free played on Radio 2.  Together with her partner and bass player Christian Dunham, Emily has been touring arts centres across the UK with a stunning new show, delighted to be singing her songs again and entrancing audiences wherever she goes.

She is passionate about songwriting, saying in a recent interview that “music to me is all about uplifting, comforting and inspiring people”.  In 2017, she was interviewed by Coronation Street actress Cherylee Houston for a Radio 4 programme called The Agony and the Ecstasy, talking about chronic pain, creativity and her bipolar condition.  She was also interviewed by Clare Balding for Radio 2, talking about her music, mental health and Buddhist faith.

Emily is now working on her instrumental album and looking forward to her next UK tour starting in February 2018. She is a patron of the mental health charity Restore.

‘I’d Rather Be’ from my latest album ‘A Bit Of Blue’, written after being diagnosed with bipolar disorder:

‘Over The Waterfall’ from my album ‘Bird Inside A Cage’, the most direct song I’ve ever written about being bipolar:

More info – including videos, songs, tour schedule etc – can be found at www.emilymaguire.com